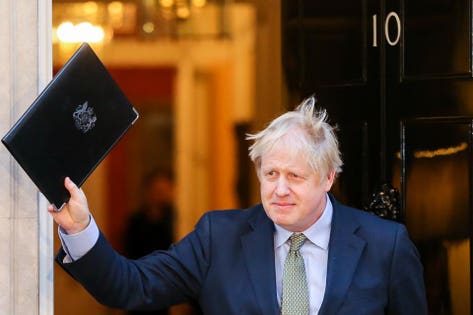 The U.K. general election of December 12 delivered a decisive victory for Boris Johnson and the Conservative Party. He steered the party to regain its majority in the House of Commons that was lost in 2017.

The Conservatives recorded a net gain of 47 seats, winning 43.6% of the vote, the best share for any party since 1979, whereas Labour suffered a net loss of 59 seats. The so called “Red Wall”, of constituencies in Northern England crumbled and seats across the Midlands also fell to the Conservatives.

This now means that with a majority of 80 Boris Johnson can steer his withdrawal treaty through parliament and the U.K. will leave the EU on January 31, 2020.

One can sense that in Europe, even if the EU really does not want the U.K. to leave, there is a sense of relief that at last some sense of certainty can be established even though negotiating a wide ranging trade deal by the end of next year will be demanding.

“Love him or hate him, with his faux-dishevelled look, his scorn for detail and above all his simplistic, endlessly repeated ‘get Brexit done’, Boris Johnson has nonetheless won his bet in the most masterly manner. … The British have decided. They have confirmed, by a wide margin, the result of the 2016 referendum and confirmed they want Brexit, or at least, that they want the result of the referendum respected.”

“Boris triumphs, Labour collapses and Brexit is almost there … There could be no more doubt. No more delay, no more uncertainty, no more half-choices: the British have confirmed their choice, for the second time, they want to leave the European Union.”

What of the view in the nation that may now be faced with shouldering an even larger share of the EU budget burden? In Germany, Süddeutsche Zeitung said:

It complained that Johnson has been completely honest in explaining how tricky the path post Brexit will be:

“Nobody separated truth from lies. This was the most important election in decades, and they had made ample use of their right to vote, so it was, we must conclude, a deliberate, clear decision, overwhelmingly made. A decision in favour of seduction and simplicity.”

“The turkeys voted for Christmas. Johnson has won big and could rule uncontested, but what has been lost is decency, sincerity and integrity”.

Once the post-election ebullience has clamed down and the Christmas and New Year hangover has faded, the serious work of moving forward begins.

European leaders are scrambling to lay down their markers, i.e. red lines for negotiations with U.K. now that the election is over. Many may envy Johnson’s new level of authority.

How ironic, the strong man of Europe wants to be out of the EU!

French president, Emmanuel Macron warned that the EU will curtail the speed and ambition of post-Brexit trade talks if the U.K. diverges from Brussels’ regulations.

Macron and German chancellor, Angela Merkel were quick to point out that U.K. access to the EU’s market had to be linked to a willingness to use shared standards after January 31, 2020.

“What we say, simply, is that the more ambitious the agreement, the more substantial the regulatory alignment must be, talks could go pretty quickly…we do not want to change very much’”.

The concept of a level playing field has long ben central to the EU’s vision of a future relationship with the U.K. It certainly does not EU companies to be left disadvantaged as the British may adopt standards that would create a sense of competition from across the Channel.

“Britain would become a competitor on our doorstep now that it is no longer integrated in the internal market … The U.K. will, of course, carefully weigh up the advantages of leaving the standards that we have in the EU, and what would be the disadvantages of doing that,”

EU officials will start in January to draw up a blueprint of the mission critical issues for trade talks with the U.K. as well as looking to cover all other aspects of the future relationship.

Naturally, this is going to be a process of demanding detail. It is hoped that a “Heads of Agreement” can be adopted in February.

That should see dialogue start in earnest with a key date for progress to be reviewed set at the end of June.

At that stage there would be a deadline for the U.K. to request an extension to the 11-month transition period.

Given the majority at his command, Johnson does not have to pander to any special interest group. He can strive to find the right deal for the U.K. although I think he will do all he can to avoid an extension and seek further dither and delay. To do so would really be seen as an insult to the voters in constituencies that turned blue for the first time.

I have faith that a deal will be done as it is in the interest of the EU to strike a deal. Do not forget the value of money. The UK had an overall trade deficit of £66 billion ($85.8 billion) with the EU in 2018. They will not want to jeopardise that cash cow.