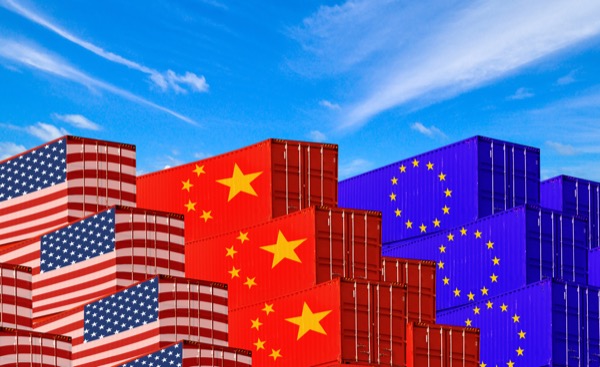 This morning’s US data emphasized a couple key trends about the economy; inflation is firmly anchored and not necessarily a problem for the Fed, and the labor market is still showing signs of resilience.  The data-dependent Fed can still go ahead with delivering a third consecutive rate cut on October 30th, but will likely remain patient on committing to an easing cycle.
If we don’t see a complete collapse in trade talks, the bullish case for US stocks remains in place as the US economy is still likely to see modest growth and the Fed is unlikely to raise rates over the next couple of years as inflation will probably not rise above their target over the next year.
Trade
Trade updates have been confusing at the very least.  It seems deputy level meetings yielded no major progress, but we are still on a path to see a partial trade agreement and yet China may now plan to leave Washington on Thursday, a full day early.  President Trump was expected to meet with China’s top-level officials on Friday, so it is hard to imagine they will leave if a partial agreement is reached.
The next round of tariff increases that are targeted to take place on October 15th may be put on ice.  It however is hard to be strongly optimistic as we’ve been here before. In May we thought a deal was happening, then again at the G20 in June, but now it seems the best we can hope for is a partial agreement, more like a band-aid solution that will see the trade war eventually flare up again.

Yuan
Currency pact speculation between the world’s two largest economies saw the Chinese yuan strengthen ahead of the next ‘do or die’ moment in trade talks. The offshore currency has given back some of its earlier gains and now trades at 7.1267.  We could see the beginnings of the assemblance of a trade deal come out of this week’s negotiations and a currency pact could be easy as it seems they will revisit the terms that were agreed upon back in early May.
Oil
Oil prices are rising on production risks from Ecuador, positive comments from Secretary-General Mohammad Barkindo and trade optimism.  Fresh geopolitical risks from Iraq and Ecuador have been providing an added backdrop for higher oil prices.  Ecuador has oil production down over 200K barrels due to unrest and we could see that situation get much worse.
Barkindo’s comment remind markets that if oil prices do not fall off a cliff over demand concerns, we could very see OPEC + extend their production cuts throughout the majority of 2020.  If oil prices (Brent) fell below $50 a barrel many oil traders were expecting Saudis and Russians to abandon the production cut agreement.  Once the production cuts completely lose their effectiveness in supporting prices, its pointless to continue giving up oil revenue.
Oil could get a double dose of good news this week if we see a mini-trade deal support the demand side and geopolitical risks keep tightness with supplies.
Gold
Gold prices are trying to the weather the storm that is rising trade optimism on Fed stubbornness.  Gold could see two or three percentage points of weakness on a partial trade agreement.  The yellow metal also struggled after the normally dovish Fed’s Kaplan noted that rate cuts should be constrained.  The Fed’s Minutes kept the door open for the October rate cut but did little to sway the needle on seeing them capitulate on an easing cycle.
Gold should be supported on global stimulus bets and rising geopolitical risks that now include Syria, Iraq and Ecuador.
Bitcoin
Bitcoin and altcoins are giving up some of this week’s earlier gains that stemmed from the Devcon conference in Japan.  A key moment in the conference occurred when the creators of the second-largest cryptocurrency by market cap, Ethereum recognized the blockchain platform was not ready for mass adoption and a reboot would take place in at least two years.
Further attempts to bring to credibility to the crypto-universe saw a small setback with the yesterday’s SEC decision that rejected the Bitwise Asset Management ETF proposal.  Cryptocurrencies are getting closer to getting more traditional trading instruments and that in the long-run is very positive for all digital coins.
The whole crypto-space is going through some growing pains and while the regulatory environment remains cloudy at best, demand is still growing, and we should not be surprised if we see Bitcoin continue to stabilize here.