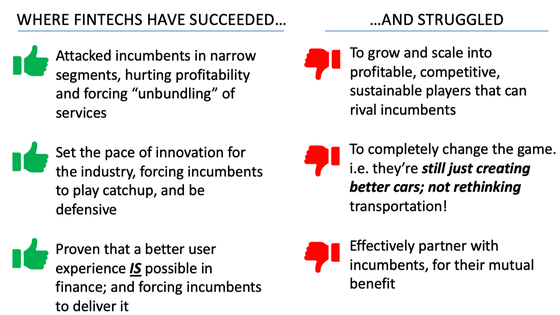 The modern FinTech revolution that began circa 2010 hasn’t resulted in massive disruption of incumbent financial institutions. The doomsday scenario for traditional financial companies, painted by high flying FinTech startup CEOs hasn’t materialized. Last we checked, Morgan Stanley and Goldman Sachs on Wall Street, Fidelity Investments and Charles Schwab in wealth management, Citi and Bank of America in retail banking are all very much still here. Not much disruption seems to have taken place in finance. After all, we don’t have a Blockbuster, nor an Uber equivalent in Finance. All the claims in 2013-2015 that FinTech startups would “disrupt” incumbent financial institutions have been debunked. Lending startups like SOFI and LendingClub were supposed to kill big franchises like BofA or Citi, robo advisers like Betterment and Wealthfront were going to squeeze out Schwab and Fidelity. Instead, FinTech entrepreneurs have changed their tune, talking much more about partnering with incumbent institutions instead of disrupting them. Even successful FinTech startup CEOs are willing to sell out to financial institutions, instead of growing their business and becoming multi-billion dollar franchises that rival traditional financial institutions in size and scale.

So, have VC-funded FinTech startups over the last decade been mere distractors, and a far cry from being major disruptors?

Like a lot of things in life, its complicated. Disruption is one extreme end of the change spectrum, with status quo being the other end. In between those extremes lie many stages and colors of change, which may not be readily visible, but connecting the dots reveals a pattern. And the pattern is definitely disturbing for traditional, established financial companies.

Digital firms (FAANGs and others) are wedging themselves into the value chain between the customer and the financial institution, influencing customer decisions and carrying the relationship away from the institution. Manufacturers of financial products are losing ground to distributors, while digitization consolidates distributor relationships.  Transparency and competition are driving down fees while digital technology is helping customers switch providers more easily. Niche FinTech startups have already targeted narrow slices of the bundled financial offering, weakening the historical advantage that large financial institutions have enjoyed by aggregating multiple services.

So think beyond disruption. There are a lot of other ways that startups and emerging technology are forcing change, with major implications for industry structure, profitability, growth, even our own careers. Here are some major ones:

1.   Startups May Not Have Disrupted, But Have Definitely Shaken Up Incumbents. David Solomon and Jamie Dimon may not often acknowledge this, but their banks are feeling the heat from VC-funded FinTech startups. Startups are setting the pace of innovation, setting new standards of service for customers, creating an incredibly better UI, and new business models that eliminate the agency problems and conflicts of interest that incumbent institutions have. So, while there may be just a handful of FinTech Unicorns, startups are collectively driving the narrative in financial services, forcing incumbents to create innovation arms, corporate venture capital (CVC) groups and even roll out their own startup like sub-brands.

2.   FinTechs Steal The Incumbent’s Best Customers. Historically, financial institutions competed with each other based on size and scale. But some FinTechs are carefully identifying the best customers of incumbent institutions and stealing them away from them. In insurance, the carrier’s business model is to pool the risks of millions of customers, with low risk folks subsidizing high-risk customer settlement claims. So when Insurance startups like HealthIQ enter using clever health quizzes and alternative data to identify the most healthy people and then steal them away from traditional insurers like State Farm or GEICO, it undermines the entire business model of these insurers, and drives their profits down. This is happening in many sectors in finance from wealth management to student lending (e.g. SOFI).

3.     Disrupting the Incumbent’s Cross-Subsidy Model. Profitability for large financial institutions has long been based on cross subsidization. Commercial banks have historically lost money on money remittance transactions, only to more than make it on high FX fees. Retail brokers have offered cheap trade execution, instead making money off order flow and investment advice. But FinTech startups have disrupted the cross-subsidy model of large firms by attacking narrow, individual services, offering significantly better cost, convenience or service. This forces incumbents to push down fees, while driving up their costs as incumbents struggle to compete with many startups in each individual service area. E.g. Transferwise and others have attacked behemoths like Western Union in money transfer and remittance. Western Union used to offer low transaction fees, while making its profits on FX fees. Not anymore.

4.     Incumbents Realize They Needn’t Build the Wall Themselves. ‘Build it inhouse’ has been the mantra in finance for a long time. Building the entire product wall themselves and offering it to customers has been a key element of differentiation and strategy. This is changing quickly. Incumbents are struggling to meet customer expectations and realizing that they can integrate other people’s “bricks” into their “product wall” or “platform”. Banks, brokers and insurance carriers are all trying to become the platform on which 3rd party services are integrated, just as long as they hold the customer relationship. To use a housing analogy, financial companies want to become General Contractors, coordinating and serving up other service providers to end clients. Problem is: the digital economic model doesn’t accommodate too many general contractors, it’s “a winner take all” model.

5.     Strange Bedfellows Emerge. Groucho Marx said “politics doesn’t make strange bedfellows, marriage does”. Unconventional partnerships are emerging as business goes digital. Uber and Spotify have partnered, so Spotify customers are welcomed into an Uber with their music playlist belting out their favorite tunes. Similar odd couples are emerging in financial services to drive value and exploit digital opportunities. The challenge is that banks don’t think out of the box when it comes to partnerships. Co-branding a credit card with the NFL is considered a supreme achievement, when it should be considered table stakes. Financial companies must understand value chains better and use digital technology to develop innovative partnerships. Just like Bank of America partners with digital upstart Cardlytics using its data intelligence platform to power the bank’s card offers.

6.     Talent Challenge As Grads No Longer Long For Goldman: Harvard, UPenn, MIT… Wall Street and large financial institutions have always been the top choice for Ivy grads. Not anymore. Traditional financial companies are struggling to attract top talent, as the smartest grads prefer working for high tech, digital firms, FinTech startups, or become entrepreneurs. Only then comes Goldman, Fidelity or Citibank. Compounding this issue is the fact that financial companies are desperately looking, not for bankers or investment analysts, but techies with skills in data analysis, DLT and Machine Learning. In 2018, there were 9,500 open digital tech positions on Wall Street alone!

After 5-7 years of explosive startup growth, the FinTech CEO’s warning “we are coming after you, JPMorgan”, has turned into a whimper. Startups haven’t caused much disruption in finance. We don’t have our Blockbuster or Polaroid. While there are thousands of FinTech startups there are just about 50 Unicorns globally, so scaling up remains a huge challenge.

But large financial companies shouldn’t get complacent. It’s too early to declare that “disruption is dead” in Finance. We are still at the start of the 2nd phase of growth. The first phase was 2012-2018, the second phase will be 2019-2025, and by the third phase starting 2026, a new financial industry would have emerged. So let’s reserve our judgment about disruption. Change won’t come fast like a Boston blizzard, but like an iceberg that seems puny over the surface, while grave danger lurks below.

Disruption is not the only lens through we should examine the impact of startups. It is one extreme end of the change spectrum, with current status quo being at the other end. FinTechs may not have ‘taken out’ financial incumbents, but they are fundamentally altering the industry in other important ways. Startups are pressuring incumbents to innovate. Just like Napster failed but changed music forever, individual FinTechs may fail, but they will succeed in changing the status quo. By 2022, when we look at the impact FinTechs have had, it will be evident how they have shaken things up: waking up incumbents, altering industry profitability and reorganizing value chains. When we look back, FinTechs will have forced staid financial institutions to radically change.