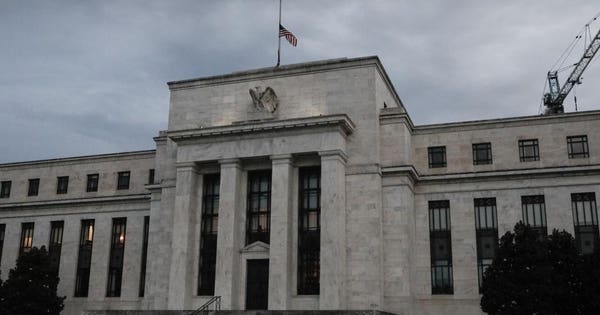 QE (quantitative easing) worked but the idea was that once things settled down, reverse-QE, which was called QT (quantitative tightening), would put the genie of free money back in its box. In practical terms QE made debt worth more and hence money cheap and plentiful but the downside was that the Federal Reserve would have a mountain of paper assets balanced by mountains of liabilities.

These giant mountains of debt are financially scary to most simply because they are so huge. Trillions mount up in a country of a third of a billion people, many without a net dollar of personal wealth to bless them. Five trillion dollars on both sides of the Fed’s balance sheet amounts to $60,000 of assets and liabilities per four-person U.S. family, so it’s not surprising that everyone agreed that the Fed should unwind its exploded balance sheet.

It tried and pretty soon a booming global economy started to come off the rails. Those trillions refloated the world economy, and pulling money out of the system at first hurt at the margins and then as each month the Fed’s balance sheet was drawn down, the negative effect on growth came closer and closer to home. Last winter the markets buckled and soon enough the Fed was walking back QT and this August ended the program earlier than planned.

Then in September the U.S. debt market malfunctioned and the Fed had to step in and douse the cash drought with buckets of cash.

What do you know, the Fed’s balance sheet is up. QE restarted at least for the period needed to get the short term money markets back on track.

This is the chart of the Federal Reserve’s balance sheet:

I have been writing here on Forbes about the primacy of the U.S. Federal Reserves QE/QT in the markets for years now and this remains the key driver of the economy of the world and is particularly a driver of equity valuations.

Few go bust when money is cheap to borrow, everyone goes bust when credit freezes as we saw in 2007-2008. The government has confiscated the credit mechanism from Wall Street and it now decides how much money goes around and it does so, at least for now, by the “unorthodox monetary policy” of quantitative liquidity adjustments.

The above chart is very important because it states that there is only just enough money to go around to stop the U.S. tipping into a recession/depression and that QT had already overshot when it was brought to a premature end. It also demonstrates that there is no going back to the good old days and that the Fed is now lashed to the wheel of managing money supply by navigating markets. This is a perilous and seemingly inescapable destiny.

Some might say the Fed lost control of the economy and this “stick save” shows that rupture is inevitable, but to me it says that the current management are on point and sufficiently on the ball to change direction when required to do so. The trouble with centralization is you only need one intransigent person at the top to create a catastrophe when a situation needs a pivot but they know better.

So what does this mean for investors?

At some point this should lead to the end of this long period of sideways trading in equities.

The Dow Jones has been trading sideways

The current QE/QT mechanism relies on money being printed in house and stock equity, with that used as collateral for cheap debt. This equity debt creation is meant to drive growth. It probably does, but slowly, because holding things back is a toxic cocktail of demographics, regulation and the terrorization of the public by a frenzied, doom-laden and vituperative media.

Yet only something worthy of the media’s perma-doom can stop the market grinding higher, even against a background of trade war and political mayhem.

QT is dead. Is QE back? It could very easily be the next direction of travel and the Fed’s recent chart says it all. QE lives.

Clem Chambers is the CEO of private investors website ADVFN.com and author of Be Rich, The Game in Wall Street and Trading Cryptocurrencies: A Beginner’s Guide.

Chambers won Journalist of the Year in the Business Market Commentary category in the State Street UK Institutional Press Awards in 2018.