GBP: The Pound has edged up 0.2% and continues to hover around its best level in over a month as imminent Brexit risks have been diminished. That said, with parliament suspended and Boris Johnson’s calls for a snap-election rejected, GBP implied volatility has dropped with both the 1D and 1W tenors dropping 2.9 and 1.4vols respectively. Elsewhere, the ONS showed that the labour market remains tight with the unemployment rate ticking lower, while wages pushed higher. As such, GBP/USD downside has been somewhat limited thus far.

JPY: Japanese Yen weakened on the back of source reports that BoJ policymakers could be open to a debate on further monetary easing, which would entail cutting rates deeper into negative territory. Consequently, this pushed USD/JPY to session highs, before gains had been capped yet again at the 107.50 handle.

SEK / NOK: The Scandies are notably weaker with the SEK dropping on the back of lower than expected inflation data (CPIF 1.3% vs. Exp. 1.5%), in turn, this raises questions as to whether the Riksbank can continue to signal that rates may rise at the backend of the year to Q1 2020. Elsewhere, while softer inflation data had also taken the shine away from the Norweigan Krona, the Norges Bank still remain set to raise interest rates in September with the Regional Network Survey highlighting that growth remained solid throughout the summer. 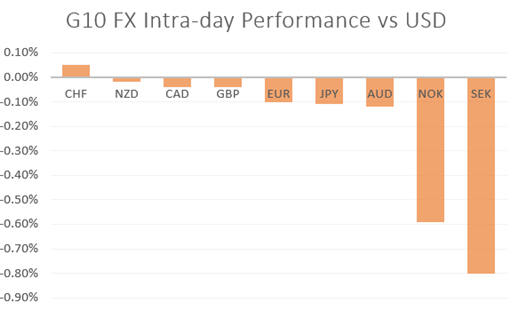