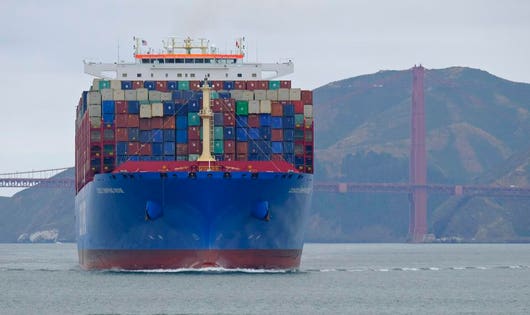 Next week marks the final week before the Made in China discount ticket to the American mega mall expires.

But as 10% tariffs on roughly $300 billion worth of goods goes into effect on Sept 1., there are other issues percolating that are still hard to grasp. The tech war with Huawei at the center continues apace. It is unclear how long this latest reprieve, allowing for some U.S. companies to sell microprocessors to the Chinese telecom giant, will last but it remains a reliable front in the trade war.

The other is biotech. That’s next in line with China and the U.S. nearly neck-in-neck for worldwide patents for genome editing drugs for cancer and other diseases.

And then there are bans on China investments in the U.S., particularly corporate money looking to make acquisitions, gaining know-how and technology that could one day make corporate China a bigger powerhouse than corporate America. This reality is especially noticeable in Asia, where China tech brands are gaining market share. Huawei’s smartphones, for instance, have replaced the iPhone as a top 2 seller in mainland China, a prized market for Apple.

The U.S. Trade Representative maintains four lists of excluded items based on the international Harmonized Tariff System code. Items on list 1 and 2 are no longer open to exemption requests by new companies. Companies will have to know their HTS code to see if exemptions were granted for that specific product already to another company.

List 3 is now in the works. Most companies will be denied.

“One big prong for us in dealing with the trade war is the tariff exclusion requests and the other is dealing with CFIUS and foreign investment controls that are not related to tariffs but are heading in the same direction,” says Alan Enslen, a shareholding attorney at Baker Donelson in charge of their international trade and national security practice.

CFIUS stands for the Committee on Foreign Investment in the United States, which has a list of rules regarding investment by foreign nationals.

The forthcoming duties are further evidence that the U.S.-China bilateral relationship is in limbo. “The Chosen One”, President Trump, has put us there.

Trump said this week that the trade dispute was years in the making commenting, in gest, that he supposed he was “the chosen one” to tackle the China problem.

Nick Marro, global trade leader at The Economist Intelligence Unit, wrote in a report on Thursday titled “Ticking Time Bombs” that he doubts Trump hikes tariffs to 25% as he did with the 10% tariffs on $200 billion worth of goods around the same time last year. He gives it a 40% chance.

Marro thinks Trump doesn’t escalate to 25% for political reasons ahead of the 2020 campaign season, an election China is betting he will lose. The majority of polls agree with Beijing.

Depending on who the Democratic nominee is, China would be wise not to think a Trumpless White House is good for them. Two leading candidates at this time, Bernie Sanders and Elizabeth Warren, have about as much affinity for Wall Street as they do China.

“Businesses should prepare for a prolonged conflict and be aware that the trade war could escalate in other ways,” he says.

The September tariff hike is the first part of a two-pronged action.

The first action will cover roughly 40% of goods within the list of $300 billion now in the crosshairs.

For the first time, Made in China apparel and textiles will be priced higher at all ports of entry. Retailers will either eat the 10% or could start raising prices if they haven’t already.

The remaining items, including toys and consumer electronics, will be taxed on Dec. 15. That would be the day when all of China’s exports to the U.S. are tariffed at higher rates for the first time since China’s opening up to world markets.

As a result, imported goods from China will be seeing duties double or triple over the course of the next four months.

Most U.S. exports to China are already subject to retaliatory Chinese duties anyway. Moreover, they already pay higher port taxes than China goods once paid to enter the U.S.

Higher costs are forcing companies to move some of their supply chain out of China.

“Every company I’m working with is looking at moving,” says Enslen. “For some it’s a no-brainer. For others, it’s a stretch to think you can up and move. It’s not easy for some of them to source outside of China.”

Seeing how China doesn’t import much from the U.S., how can they punish Washington the way Washington is punishing them by forcing a global rethink of China’s role as world manufacturing hub?

The ongoing spat with Huawei has raised the risk of China deploying its own unreliable entity list against foreign firms this year.

Morro doubts that China will dump its Treasury holdings, a favorite of China trade war drama addicts. The U.S. Treasury bond market is one of the only investment grade sovereign bond markets that actually pays interest to investors. European bonds are barely above zero on a good day.

Morro also doubts China will engage in purposeful devaluation of its currency.

Treasury labeled China a “currency manipulator” this month, just in case they consider a deval. That gives the U.S. an excuse to hike tariffs each time the yuan weakens to compensate for higher costs.

Morro doesn’t discount either of those low probabilities becoming more probable if Trump goes from 10% to 25% during his tenure, which doesn’t officially end until early January 2021 assuming he loses his re-election bid.

“We cannot fully discount the risk of China employing either strategy in response to additional trade pressure,” Morro says.