Traders work after the closing bell at the New York Stock Exchange (NYSE) on August 7, 2019 in New York City. – Wall Street stocks finished little changed on August 7, 2019, following a choppy session as a plunge in treasury bond yields early in the day underscored worries about a weakening global economy.

An under-the-radar hedge fund is ruling the industry with a nearly 30% return this year so far, and it’s more than doubling its bet on gold.

Sandler Capital Management, with $2.1 billion in regulatory assets under management, is run by much smaller and lesser-known managers than star investors like David Einhorn and Bill Ackman. But it is one of the best stock-picking funds this year, almost doubling the year-to-date gains for the S&P 500, according to Symmetric.io, a hedge-fund tracking firm.

Based on its latest regulatory filings, Sandler increased its stake in the SPDR Gold Trust by nearly 180% to $38 million by the end of the second quarter, making it the biggest position the fund holds. The ramped-up wager could be a defensive play against more market turbulence ahead.

The precious metal has become increasingly attractive in a world full of negative yielding debt. Gold prices topped over $1,500 an ounce recently as investors fled to hard assets amid a global slowdown and fears of a recession. Its safe-haven status also drew a recommendation from hedge fund guru Ray Dalio, who lately advocated putting money into gold during the upcoming “paradigm shift” for global markets

CNBC used Symmetric.io to find those hidden gems from nearly 1,000 hedge funds in its database with this proprietary indicator of performance called StockAlpha. The scores stemmed from comparing the performance of equities in the funds with that of a sector exchange-traded fund.

Besides Sandler, other winners in the hedge fund industry are also less talked about and run by managers who are not household names. 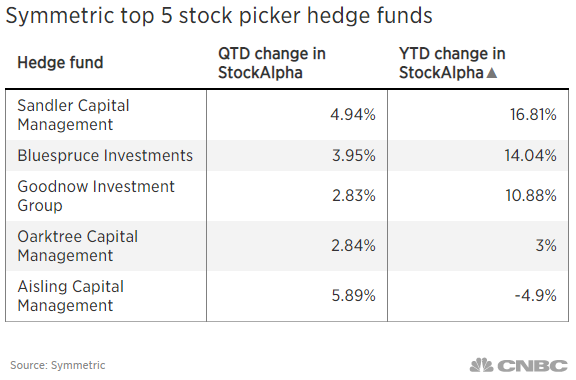 Bluespruce Investments, Aisling Capital, Goodnow Investment Group and Oaktree Capital Management are among the top stock-picking hedge funds this year beating the market, according to Symmetric.io.

Four times a year, hedge funds file their long positions with the Securities and Exchange Commission, and the information is released to the public 45 days after each quarter ends. Here’s a look at their top new positions added by the end of the second quarter. 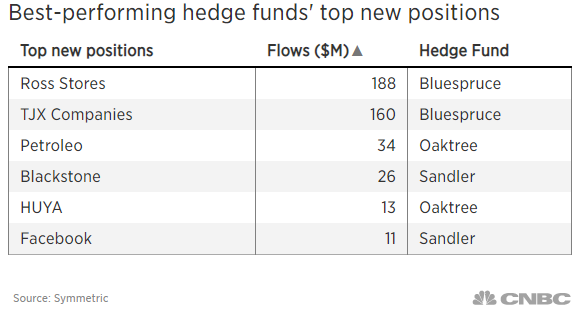 Bluespruce piled into discount stores TJX Companies and Ross Stores with more than $150 million new investments in each. TJX and Ross have gained 12% and 24% this year respectively.

Sandler added new bets on Blackstone and Facebook, betting their solid performance will continue to gain momentum. Blackstone soared a whopping 63% this year while Facebook also skyrocketed 40% in 2019.