Bank stocks are getting slammed this week as the trade war heats up, but according to some analysts, that selling is misplaced.

But Mike Mayo, head of U.S. large-cap bank research at Wells Fargo Securities, told clients this week that bank stocks already have the potential for trouble baked in.

“Bank stock valuations have essentially priced in a recession already, reducing downside stock price risk at a time when more banks are originating loans with recession-type underwriting standards,” Mayo said in a note to clients.

Interest rates plunged as investors rushed to the safety of government bonds Wednesday. The move away from risk assets added to fears that the economy was headed for trouble, as the U.S.-China trade war shows no sign of wrapping up soon.

Lower rates do not help the banks. “There’s no sugar coating that,” Mayo acknowledged.

Near-term uncertainty around banks – because of falling rates, recent volatility and ominous signals from the bond market -  might lead to cautious earnings guidance in September, he said.

While most of these U.S. banks don’t directly lend abroad, or deal with international trade, tariff escalation has a potential spillover effect to the U.S. consumer and business spending.

As recession fears ratchet up, the chances that the Federal Reserve will cut interest rates again do too. And as the Fed Funds rate goes lower, the difference between what banks earn by making loans at higher interest rates than what they pay depositors — known as net interest income — tightens.

Banks had already flagged potential storm clouds moving in. In its second-quarter earnings report, Bank of America warned that falling interest rates would cause a main engine of bank profits to sputter to a halt this year. Wells Fargo and J.P. Morgan Chase also indicated that falling rates would impact net interest income.

Both long- and short-term rates have dropped in recent months, hurting the bank in a few ways, Bank of America’s CFO said in a second-quarter conference call. Mortgage customers may refinance at a lower rate, new bonds purchased will offer lower coupons hitting returns on the bank’s portfolio. Its “floating rate” assets held by the bank will also yield less.

Financials were the worst-performing sector on Wednesday. Banks led the sector lower, with the Keefe Bruyette & Woods Nasdaq Bank Index, or KBW, down 5% week to date, on pace for its worst week since March. Bank of America shares are down 8% this week. Regional banks took an even bigger hit, and were down more than 9% month to date, on pace for the first negative month since May. KeyCorp is down 13% month to date, while BB&T and SunTrust have both fallen more than 10%. 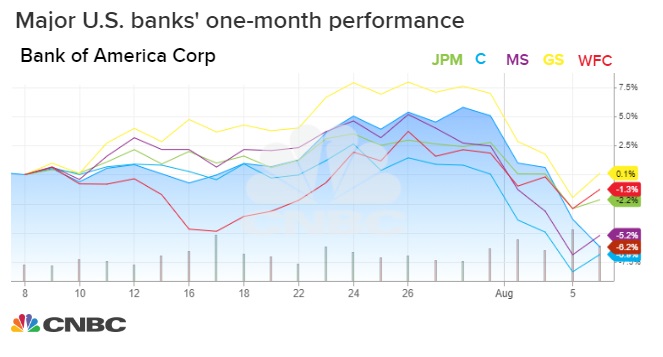 Marty Mosby, director of bank and equity strategies at Vining Sparks, said part of investors’ fears also come down to consumer credit. If the U.S economy were to spiral, higher credit losses would hit the banks. But he also said investors’ selling was a typical “knee-jerk” reaction of ditching bank stocks when recession fears ramp up.

“What we’re looking at is the muscle memory of the market,” Mosby said. “As investors got burned in the financial crisis they’re saying, ‘fool me once but you’re not going to fool me again’. They’re going to be the first ones to get out of banks before we go into a downturn.”

In some cases, perception can be worse than reality for banks. Mosby pointed to similar bank sell-offs after an energy debacle and Brexit in 2016.

“Whenever market pulls back for any reason, whatever the headline, the banks are going to go down,” Mosby said. “There is a fear factor with investors and algorithm trading.”

Banks are in a much different place than they were before the financial crisis. They have been forced to de-risked balance sheets, and seen conservative loan growth over the past decade. Stress tests show that they can withstand a financial shock. In June, banks also got approval to buy back shares, which Mosby said adds to their value proposition.

Mayo pointed to the 1990s, when bank net interest margins declined, but efficiency still improved and bank stocks outperformed, as he expects will happen today. He’s also factoring in the chance that the president takes to Twitter and surprises the market with better news on trade.

“The group could also be one tweet away from benefiting to the upside if there is progress with trade negotiations which, in turn, could improve the outlook for lending, capital markets, and other fee revenues,” Mayo said