The US auto industry is in peril despite efforts from the Trump administration to bolster the sector and revert manufacturing back to domestic plants. That said, the two largest US auto manufacturers, Ford and General Motors, have performed admirably in the year-to-date. Ford has climbed 11.5% while GM is just 3% higher. By comparison, the S&P 500 has enjoyed a rally of more than 10.5%. While the gap may not seem large given that the auto industry is a mature one and demand is cyclical, the picture is direr over a wider timeframe. 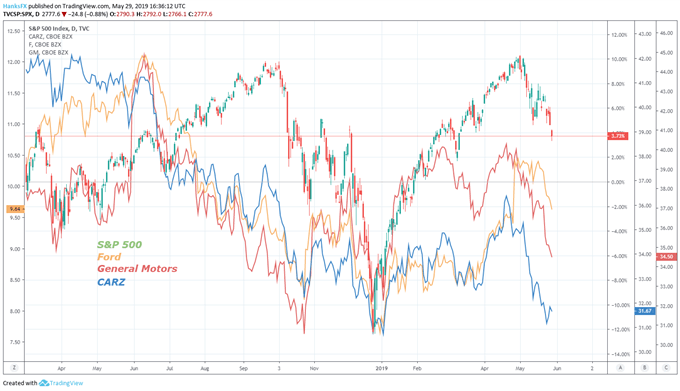 Since President Trump announced steel and aluminum tariffs on March 1, 2018, Ford has slipped -2% and GM has slumped roughly 6%. In the same period, the S&P 500 has posted a gain of 2.35%. Still, stock prices do not reflect the whole story.

In a move that drew the ire of President Trump, General Motors announced on February 4 it would cut 4,000 jobs in an effort to restructure. Often, layoffs cause a bump in stock price – as fat is trimmed and costs are reduced. After the announcement on February 4, GM shares rallied roughly 2% – offsetting some of the pain from the tariff headwinds.

View A Brief History of Trade Wars for insight on economic conflicts of the past.

Similarly, Ford announced its own round of job cuts on May 20. The auto manufacturer released plans to eliminate 10% of its salaried workforce, which translates to nearly 7,000 jobs. The plan will reach completion at the end of August 2019. The announcement is supplemental to an earlier decision by the company to begin cutting nearly 20,000 jobs earlier in 2019. 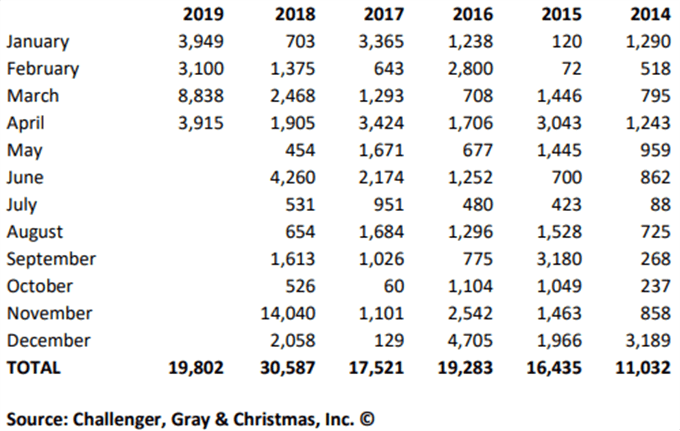 According to outplacement firm Challenger, Gray & Christmas, the auto industry is cutting workers at the quickest rate since the Great Financial Crisis as auto cuts surge 207% over the last year. While part of the restructuring can be attributed to increased automation and industry change, the headwinds from tariffs and prolonged uncertainty have undoubtedly weighed on other industries – some of which are direct suppliers to US automakers.

Steel producers that conduct most of their business in the United States like US Steel (X), Nucor (NUE), AK Steel (AKS) and Steel Dynamics (STLD) find themselves in a similar position to the US auto industry. Since the United States announced steel and aluminum tariffs on March 1, 2018, the four steel companies have shed nearly -12% each. 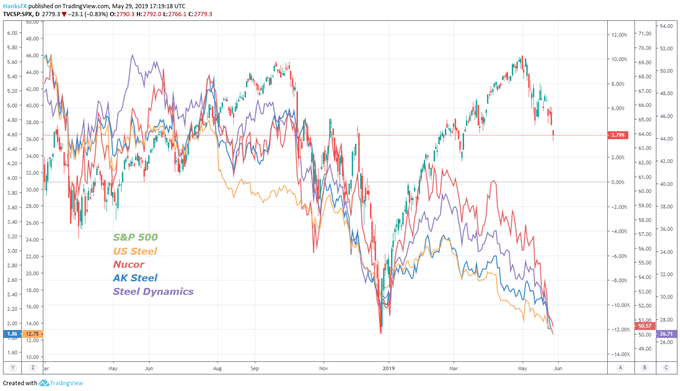 The steel and aluminum tariffs have not only impacted the manufacturers directly but have been passed on to auto manufacturers, increasing costs which thereby decreases margins. The knock-on effect has weighed on two key industries in the manufacturing sector and the impact of tariffs has started to spill into other sectors like retail.

Although a key headwind was lifted with the removal of metal tariffs on Mexico and Canada, USMCA remains unratified. Further, the steel and auto stocks above enjoyed very little reprieve following their removal. Now, the industries must grapple with increased levies between the United States and China – along with a 6-month period of uncertainty regarding auto tariffs on the European Union and Japan.

These sector-specific themes fall against a backdrop of slowing global growth. Together, waning demand and rising costs will continue to pressure a sector that was forced into a bailout during the Great Financial Crisis. Should renewed pressure befall the stock market, the beleaguered industry will have to enact even greater change if it is to avoid a similar fate. As these themes unfold, follow @PeterHanksFX on Twitter for updates and analysis.

Read more: What if Mexico, Canada Join the US in the Trade War with China?

DailyFX forecasts on a variety of currencies such as the US Dollar or the Euro are available from the DailyFX Trading Guides page. If you’re looking to improve your trading approach, check out Traits of Successful Traders. And if you’re looking for an introductory primer to the Forex market, check out our New to FX Guide.