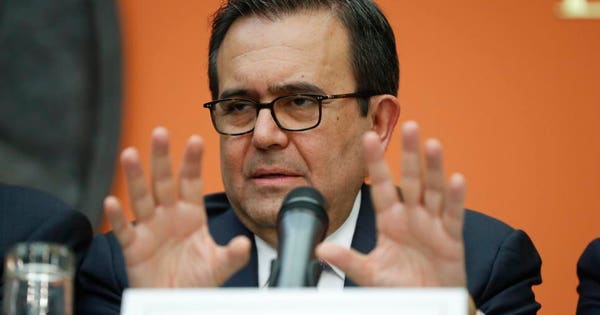 Mexico’s Secretary of Economy Ildefonso Guajardo gestures while speaking during a news conference at the Mexican Embassy in Washington, Monday, Aug. 27, 2018. The Trump administration and Mexico have reached a preliminary accord to end the North American Free Trade Agreement and replace it with a deal that the administration wants to be more favorable to the United States. (AP Photo/Pablo Martinez Monsivais)

Per last week’s update — and our Insights/predictions from 16 May and 30 May — the U.S. administration has backed off its latest tariff threat against Mexico. Meanwhile, the U.S.-China tech cold war continues to heat up, with China announcing new export controls on sensitive technology. This reinforces our long-standing analysis that the Trump administration’s aggressive trade policies would aim more fire at China than at traditional U.S. allies, and that this trend will continue through at least 2020.

Recall that the 30 May Mexico tariff threat came right at a peak in our daily Investment/Trade Policy Risk indicator for Mexico, which was then (as now, more or less) projected to decline into early June. Likewise, the threat came amidst an elevated but already-declining Migration/Population Risk for the U.S.

Both of these trends suggested that “the latest tariff kerfuffle re: Mexico will not persist, nor will it derail the passage of NAFTA’s successor, the USMCA.” And while Trumps’ unpredictability lowered our confidence in this prediction, it turned out to be correct.

Somewhat more certain is our sense of where things are going on the China front: the upcoming Trump-Xi meeting — scheduled to take place on the sidelines of the G20 meeting in Osaka on 28-29 June — is unlikely to lead to a speedy resolution of the broader U.S.-China dispute, regardless of any positive movement on the tariff front (and virtually identical to our forecast surrounding the November G20 summit in Argentina).

Thailand: Prayut to Return as PM; Little Boon for Stability

On 6 June 2019, Thailand’s House of Representatives and Senate voted jointly to retain incumbent Prime Minister Prayut Chan-o-Cha as the country’s next civilian prime minister, in line with our prediction fromDecember 2018 that Prayut would retain the prime ministership.

The more surprising outcome is that Prayut’s eleventh hour coalition — which is set to hold 254 seats in the House — now possesses sufficient seats to form a government, putting an end to a dramatic months-long attempt by chief opposition party Pheu Thai and its runner-up (Future Forward) to cobble together a lower house coalition that would cross the 251 seat majority mark.

Our data nevertheless suggests that Prayut’s slim majority in the House will not usher in a substantial decline in political risk. On the contrary and per below, our Government Instability Risk indicator — while remaining below the extremely high levels that prevailed during the 2014 military coup — is set to rise for the foreseeable future, with potential risk to the baht (as we describe further here).

One silver lining: our Regime Instability Risk indicator suggests that the likelihood of subsequent military intervention (i.e. another coup) is low. With Prayut at the helm, the military will effectively retain control of government through civilian means, obfuscating the need for the kind of overt military intervention which Thailand has been prone to in the past.

With another round of early elections called for 17 September 2019, our data continues to indicate that PM Netanyahu and his Likud party will lose power despite their narrow victory in April. Per below, we forecast that Government Instability Risk going into the elections will be (i) higher than around the 9 April polls; and (ii) higher than during the March 2015 Knesset elections, both of which saw Netanyahu and Likud narrowly maintain power in close contests.

The fact that risk is projected to increase through and beyond the election date supports our prediction that the incumbent Netanyahu will lose; it also indicates that the eventual governing coalition — perhaps led by the Blue and White party — will likely be fractious and difficult to construct.

Recall that we used this same indicator to accurately predict not only that Netanyahu/Likud would win the April elections, but also that Israel would nevertheless be plagued by government instability thereafter.

The preceding analysis — based on Government Instability Risk — is further supported by a number of our more fundamental Israeli political risk indicators heading into the election, as explicated on the app. In particular, both Elite Support Risk and Institutional Support Risk — which measure support for the incumbent among political/economic elites and within key state institutions, respectively — are projected to rise again heading into the September polls, a bad sign for a Netanyahu government under intense legal scrutiny and that was just upended by the PM’s failure to contain elite jockeying and party fragmentation within his right wing coalition. As such, while Mass Support Risk (i.e. the inverse of popular support) remains relatively low, it is unlikely that Netanyahu/Likud will win enough seats to form a coalition after the election.