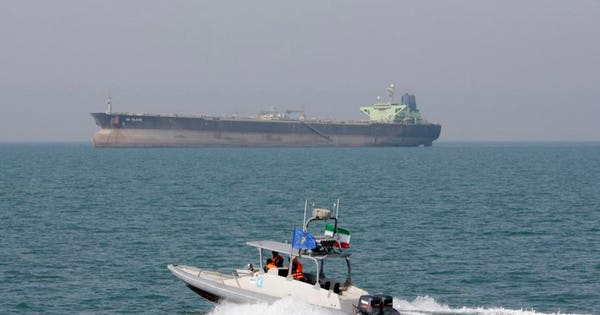 Before the U.S. became the global crude oil market’s buffer producer courtesy of its shale revolution roughly half a decade ago, Wall Street routinely factored in $5-$10 per barrel risk or geopolitical premiums, at the mildest of triggers.

This was predicated on an extreme and sudden upending of the supply-demand equilibrium in a world with little spare capacity. But that was then – right now the U.S. is the world’s largest oil producer pumping ~11 million barrels per day (bpd); a shift that is unlikely to end anytime soon, according to the International Energy Agency (IEA).

Among this new supply scenario’s many market effects – including rising U.S. crude exports and higher volumes of lighter, sweeter crude heading to Asia – is the near neutering of unpredictably high risk premiums.

An Iranian Revolutionary Guard speedboat moves in the Persian Gulf near an oil tanker with geopolitical tensions on the rise (Photo: Vahid Salemi, Associated Press)

The crude world is not necessarily any less hostile than it was at the turn of this decade. To Nigeria and Libya’s troubles, add a rapidly imploding Venezuela, and perhaps take out an improvement in Iraq. Yet American barrels keep the market in check, more so because the world’s largest producer is gradually becoming less interventionist and less dependent on the global supply pool boosted by its own sense of energy security.

That said, high magnitude geopolitical disruptions, such as a major kerfuffle in the Persian Gulf and/or a massive attack on Saudi Arabia’s East-West pipeline infrastructure, do have the potential to bring crude risk premiums back with a vengeance.

The current week has threatened to bring about just that. First came the news, on Monday (13 May) that two oil tankers carrying Saudi crude were “sabotaged” in the waters off the United Arab Emirates’ port of Fujairah. Less than a day later came the news that two oil pumping stations for the East-West pipeline had been hit by explosive-laden drones.

While Saudi Oil Minister Khalid Al-Falih called for vigilance against “terrorist entities, including the Houthi rebel militias in Yemen that are backed by Iran”, the U.S. has apparently “blamed Iran”, and Iran has predictably hinted that Israel could be behind the mischief.

On paper, the developments are pretty serious. More so, because Venezuelan crude production continues to be in free fall, with Russian outages (owing to the Urals oil contamination) and a force majeure at Nigeria’s Nembe Creek terminal already adding to market woes.

Yet for all of that, Brent and West Texas Intermediate (WTI) front-month contracts registered a mere 1% intraday jump following news of the attacks, before reverting to more muted movements for much of the session. The reason behind the relative calm – an urge to balance risk premiums against a backdrop in which one of the world’s leading consumers in the shape of U.S. is not turning as much to the global supply pool and tepid demand projections.

The unpredictable U.S.-China trade stand-off, Germany’s slowdown and Brexit versus European growth concerns are weighing on demand sentiment. The market doesn’t expect global demand to go north of 100 million bpd in 2019 and demand growth to exceed 1.4 million bpd, so it would be silly to give undue weight to supply constrictions.

Furthermore, few can dispute Iran’s fondness for belligerent rhetoric in international standoffs, but even fewer numbers would deem Tehran to be stupid enough to start a regional war in the wake of what it dubs as unjust unilateral sanctions on its entire economy, not just the oil trade, by U.S. President Donald Trump.

Here’s a test of traders’ faith in Iranian threats. The weeks leading up to the latest developments were peppered with outlandish statements by Tehran about closing the vital maritime artery of the Strait of Hormuz. But if risk premium was on the up, the CFTC Commitments of Traders report for the week ended May 7 points to anything but.

The most likely effect of all of this geopolitical tension could be tightness owing to the perceived risk of supply disruptions from the area. This will only add to the premium of short-dated oil contracts compared to deferred contracts on the futures curve, which are already trading at a premium.

According to Bloomberg data, front-end of the Brent crude oil curve is curving into sharper backwardation, i.e. current underlying price is higher than prices trading in the futures market, with the one-month contract trading at a 5-year high premium to the three-month contract ($1.72 to $1.75/barrel).

Investors are welcome to draw their own conclusions on the present market situation; but I still believe that neither Brent nor WTI futures are breaking current ranges and going anywhere fast. Come the end of 2019, barring a highly unlikely Middle Eastern conflict, we’d still be staring at ~$70-$75 per barrel averages for Brent, and ~$60-$65 for the WTI.

Disclaimer: The above commentary is meant to stimulate discussion based on the author’s opinion and analysis. It is not solicitation, recommendation or investment advice to trade oil and gas futures, options or products. Oil and gas markets can be highly volatile and opinions in the sector may change instantaneously and without notice.