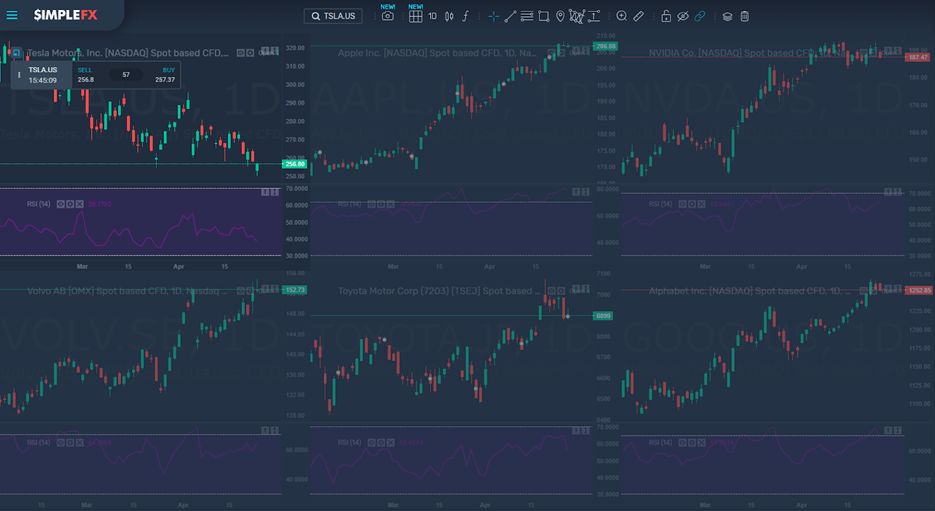 We are at the gates of
probably the most significant transport revolution in history. Tesla, Toyota,
Volvo, Renault, Apple, Google, and Nvidia – all these companies will be
affected by the technological innovation that will come to life.

You can trade the
companies directly involved in the electric and autonomous car race with SimpleFX WebTrader. Follow the news, and make
sure you have your account funded and ready to open the right position when the
decisive news arrives.

Autonomous vehicles are
just behind the corner. Elon Musk, Tesla’s CEO predicts we are “probably two
years from now we’ll make a car with no steering wheels or pedals,” while
Reuters reveals proof of Apple’s advanced engagement in the self-driving car
race.

At the same time it more and more electric cars
are being sold globally. Of course, the combustion dominance is still a fact,
but no one knows when the electric vehicles will reach a critical mass, and
replace traditional automobiles.

Did Apple join the race?

A minimum of four
companies has been in talks with Apple as the potential suppliers for next-gen
lidar sensors for self-driving cars, according to a news story by Reuters.
Apple is assessing the technology from the companies as well as developing its
units, according to insider information from three people.

This effort to develop
sensors shows Apple’s desire to create the hardware that’s needed to guide
self-driving vehicles, joining car manufacturers as well as investors in a race
to uncover the best new technologies.

This gives fresh
evidence that Apple continues to have desires to get into the self-driving
vehicle race, also known as Project Titan within the company. The focus of the
talks is the next-generation sensor which gives a 3D view of the road.

Elon Musk, chief executive of Tesla Inc, said
that self-driving “robotaxis” would be available in some US markets
next year. He continues his habit of making bold announcements, which excite
investors yet often fail to meet their deadlines.

A crucial part of his
new claim is a microchip designed for autonomous vehicles that he unveiled on
Monday in a web-broadcast presentation. The chip, which is made by Samsung
Electronics Co. Ltd. in the U.S. state of Texas, is hoped to give an edge to
Tesla against its rivals, showing its substantial investment in self-driven
vehicles. The exec has described it as “basically our entire expense
structure.

Musk reiterated that
this new chip is the best in the industry as it is dedicated solely to
autonomous driving, whereas others, such as Nvidia Corp, has developed chips
for multi-function use.

Musk began pushing the
model and its potential after his launch at the event with technical
descriptions in great detail of the progress Tesla has made on software and
hardware by top execs.

Car manufacturers
globally, start-ups and large tech companies are working on self-driving, including
Uber Technologies Inc. and Alphabet Inc.’s Waymo.  However, experts claim
that it is years yet before these systems are set to go.

Observing the upcoming
tech revolution is a fascinating thing to do. Additionally, you can capitalize
on the knowledge you acquire reading about it. Prepare your SimpleFX account for the next
groundbreaking news. Make sure you star all the companies involved and have
some funds ready to make the right order.

This article was
submitted by SimpleFX.
ForexLive