When Apple was last this far from its highs, it had a massive surge over the next year.

Apple begins this week exactly as far from its record peak hit in October: 33 percent.

“Look at the correction that we’ve had — over 30 percent peak to trough — we’ve seen this before,” Johnson said Friday on CNBC’s “Trading Nation.” “I don’t think investors are going to get many opportunities to buy a high-quality stock like this on that kind of a correction-slash-setback.” 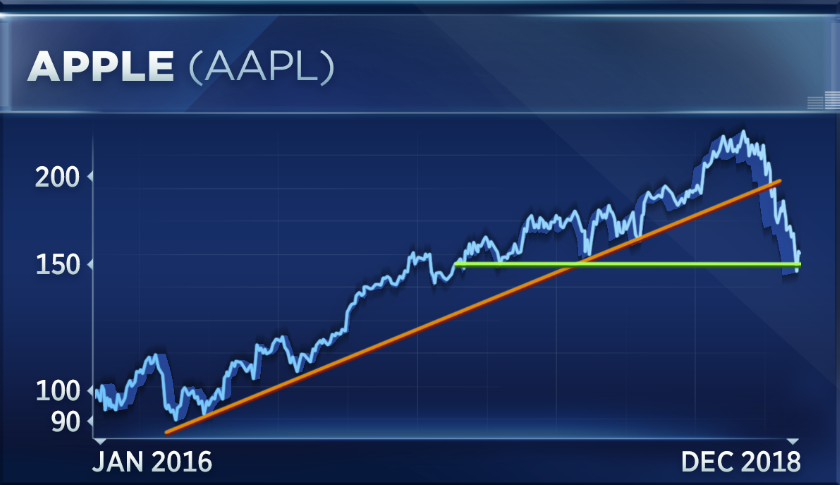 “Here’s a stock that’s got less than 12 times forward earnings for 2019, a little less than a 2 percent dividend, and from our perspective, pulled right back from technical support,” Johnson said. “We think this is a stock that should be bought going into 2019.”

Wall Street tends to agree. While the shares have plummeted, analysts have stuck to their price targets. The average price target on Apple is 40 percent from current levels, while one of the biggest bulls D.A. Davidson has a $280 target implying nearly 80 percent upside.

However, it will likely take a while for Apple to get back up to records set in October, according to Boris Schlossberg, managing director of FX strategy at BK Asset Management. Apple is currently 33 percent off its October high.

“I’m skeptical as to whether it can skyrocket back up to fresh highs in the near term,” Schlossberg said Friday on “Trading Nation.” “You have to have a Warren Buffett-type of an outlook and be a much longer-term investor on the stock.”

The main reason for its long-term viability is its singularity in the tech industry, added Schlossberg.

“The company has done a great job protecting its moat,” he said. “Whenever I talk to people as to why people stay with Apple products, it’s not because of biometric, it’s not because of the latest photo gadgets, it’s basically because of iMessage and I think that type of hold, that kind of lock-in is just very valuable to Apple going forward.”

Apple’s iMessage is its instant messaging service used within its iOS operating system. It has been part of the iPhone and iPad ecosystem since 2011.